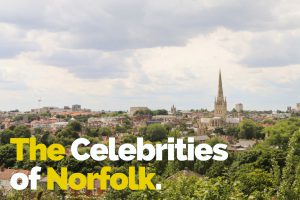 Norfolk is a popular destination for those looking to get a quiet break away from the big cities. Many people that come to Norfolk for a short holiday end up staying here on a permanent basis as its beautiful countryside landscapes, low crime rates, history, and fantastic facilities make it the perfect place to move to. Norfolk‘s great reputation is also shared amongst a number of celebrities who share an interested in our county.

Starting off our list is one of Norfolks most well-known celebs. However, quite surprisingly, she doesn’t actually live in Norfolk, despite her love of the local football team NCFC. We are in fact talking about Delia Smith. Unfortunately, Delia doesn’t call Norfolk her home, as she lives near Stowmarket in Suffolk. However, that doesn’t stop her passion for the Canaries. Delia is not only an avid fan of Norwich City, but she is also a member of the board and a majority shareholder of the club, alongside her husband Michael Wynn-Jones. Delia also owns a restaurant, Delia’s Canary Catering, at the Norwich City FC ground, Carrow Road.

Another proud Canaries fan is comedian, writer, actor, and presenter, Stephen Fry. Like Delia, Fry has strong connections with Norwich City Football Club, as he was a member of the board up until 2016 and is now an ambassador for Norwich City. Although born in London, Fry grew up in Norfolk, not far from Reepham. Although his career has taken him all over the globe, Fry never forgot his love of Norfolk. As well as getting married to his partner, Elliott Spencer in Norfolk, Fry also owns a second home in the village of West Bilney, not far from Kings Lynn.

One of the more surprising celebrities who appear on our list is Australian Actor Hugh Jackman. Most famous for his roles as Wolverine in the X-Men franchise, Jackman is one of Hollywood’s beloved stars. So you may be asking yourself, what is the connection between Hugh Jackman and Norfolk? Well, after his mother and father divorced, his mother, Grace, moved back to her childhood home in Norwich. At this time, Hugh was living with his father in Australia. However, he would later go on to visit his mother in Norwich, where he first became a loyal Canaries fan. Due to his busy schedule, Jackman doesn’t get the chance to regularly visit Norwich, but that doesn’t stop him recalling some of his best memories of our city. In fact, his favourite pub could once be found in Norwich. The Nag’s Head, which closed down in 1997, was once a favourite of Hugh’s.

Martin Shaw is an English stage, television and film actor born in Birmingham but later moved to Norfolk. He is most famous for his roles in The Professionals and Judge John Deed. He later moved to the village of Hingham in Norfolk during his time working on the TV show ‘The Chief’ from 1993 to 1995. Unlike many celebrities living in quiet countryside villages, Martin liked to make himself known, as he could often be seen flying his old aeroplanes through the skies of Hingham.

Other well-known celebrities who were either born in Norfolk or lived in Norfolk for a spell include; Princess Diana, who was born in Sandringham in Norfolk, James Dyson, who was born in Cromer and attended Greshams School in Holt, actress Olivia Colman, born in Norwich, actor Jason Statham, who once lived in Great Yarmouth, S Club 7 member and actress Hannah Spearitt, who is from Gorleston, and finally, Johnny Depp, who, although never lived in Norfolk, did once buy a bathtub from a Norwich shop… Probably not in person, but we can always dream!

If you’re thinking of buying or selling a property or would like your know the value of your property, get in touch! We can be reached on 01603 300900, by email at [email protected], or pop in and see us at De Vere House, St Faiths Lane, Norwich, NR1 1NE