Located in the tranquil village of Rocklands, Honeysuckle Cottage is a wonderful example of a well-preserved traditional Norfolk farm cottage. The property is over 350 years old and still includes many original features, and as a result, the traditional character of the cottage is evident throughout the property.

The cottage was originally used as a farm cottage for the farm opposite and had been used as such until the current owners moved there in 1986. Since then, they have had many great years living in the property, and have enjoyed raising their family here. Originally from Norfolk, Mr and Mrs Brady moved to Hertfordshire, but like many others decided to move back to Norfolk in 1986. When they first viewed Honeysuckle Cottage, they were instantly taken. Their love of the original features, rich history, and large garden, won them over. It wasn’t long after this that they purchased the cottage, and they haven’t looked back since. Unfortunately, due to family reason, they’re now looking to relocate.

Ground floor accommodation includes a kitchen breakfast room with separate utility, a family room featuring exposed timbers which adjoins the fully glassed garden room. Further reception rooms include a sitting room and snug, both with feature fireplace and hardwood floors, and a study.

To the rear of the property is a good-sized enclosed garden surrounded by countryside views. Also featured are a double garage and shared driveway suitable for multiple vehicles.

Honeysuckle Cottage is situated on Bray’s Lane in the village of Rocklands. Interestingly, Bray’s Lane was built for the growing number of Methodists who required access to the Church that was once located just behind the cottage.

The village itself is located between the busy market towns of Watton and Attleborough providing easy access to the A11 and from there to the city of Norwich or south to Cambridge. Although small in size, the village still boasts a local public house, community general store, Post Office, recreational grounds, and a primary school. Rocklands has a strong community presence and is very welcoming to new residents. 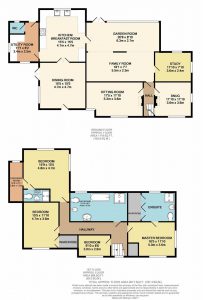 If you would like more information on this property or would like to arrange a viewing, get in touch!  We’re a friendly bunch, passionate about our county and our counties beautiful properties. We can be reached on 01603 300900, by email at [email protected], or pop in and see us at De Vere House, St Faiths Lane, Norwich, NR1 1NE.