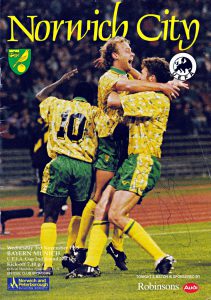 Jeremy Goss is most famously known as a former Welsh International and English Premiership footballer, however, locally, he is known for his 12-year spell playing for Norwich City Football Club, as well as his business and charitable work.

Like many professional footballers, Jeremy started playing football from a young age and it didn’t take him long to find success. He played for England Schools at the under-18 level as well as being a member of Norwich City’s Youth club where he helped the team win the FA Youth Cup in 1983. It was only a year later that Jeremy made his first team debut for Norwich City, aged just 19. During his time playing for NCFC, Jeremy found much success, playing both with and against some of the best talents in English and international football at the time. It wasn’t until the 1990-91 season where Jeremy regularly appeared in the starting line-up. It was during this time that he started to flourish, and earned a spot on the Welsh international team, where he would go on to win four and draw two out of the nine games he played in. However, the best years for Goss came during the 1992-1993 season. His fantastic volleyed goal against Leeds United was voted ‘Goal of the Month’ on Match of the Day. It was a year later in 1993, where Norwich City set a (still unbroken) record for the first time an English side had ever beaten Bayern Munich at their home ground; and of course, it was Jeremy’s opening goal that propelled the team to a 2-1 victory over the German side. To this day, the game is regarded as Norwich’s most famous win. Jeremy ended his NCFC career in 1996 after making over 200 appearances for Norwich City. After leaving Norwich, Goss went on to play for Hearts in Scotland and Colchester United, finishing his footballing career in 1999 after playing for Kings Lynn. However, Jeremy then went back to Norwich, this time working as a community ambassador for the club until early 2010, where he transitioned to assist the reserve team manager Ian Crook.

After hanging up his football boots, Jeremy turned his attention to helping others. He currently spends the majority of his time working closely alongside the Norfolk and Norwich Association for the Blind (NNAB) as the fundraising manager. NNAB provides a variety of support and advice for visually impaired people throughout Norfolk, helping them live independently. As the charity doesn’t receive any state funding, the work of people like Jeremy is vital. Jeremy’s most notable work is his Back to Bayern journey in 2011; where he cycled 1300 miles to raise money for the charity. The journey took Jeremy across Europe to the three stadiums where Norwich City played during their 1993 UEFA cup journey. As well as his charity work, Jeremy also works as a guest speaker for events and also runs a student development programme where he helps young people increase their confidence, aspirations, and desires in life.

If you’re thinking of buying or selling a property or would like your know the value of your property, get in touch! We can be reached on 01603 300900, by email at [email protected], or pop in and see us at De Vere House, St Faiths Lane, Norwich, NR1 1NE.