Norfolk Property Online is always actively involved in supporting local events, just recently we were at The Royal Norfolk Show with Emmaus our nominated charity of the year. 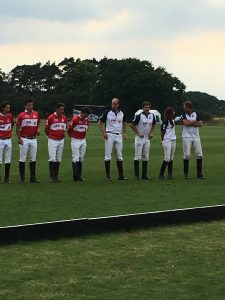 So, when we were asked if we could offer our support by taking a table at The Norfolk Polo Festival this year, we didn’t hesitate. What we didn’t know though was that it was to be a royal event with Prince William playing for Team Tarmac against Team Feedmark.
After a gorgeous lunch by Brasted’s, we were then given a demonstration on how to play polo.
Our guest, Mustard TV presenter Helen McDermott was then asked to throw the ball in to start the match from a beautiful old, red Bentley.
The two teams then entertained the guests with thunderous speed and skills; it became obvious very quickly who’s team everyone wanted to win. Every time Prince William touched the ball cheers echoed all around the marquee.
The match ended in a draw, and after some debate whether it should go to extra time or not, both teams agreed to share the cup.
After the cup presentation, Prince William had to leave us, but we were then entertained with some thrilling aerobatics, Spanish guitar and an Argentinian BBQ.
It was a fantastic day, and over £90,000 was raised for SkillForce and English Schools Swimming Association charities, both of which Prince William is the patron.
As well as Helen McDermott and her partner, our other guests included Galton Blackiston, Rob Chandler and his partner, Su Ingle and Caroline Culot. Big thank you to our guests for coming along and making it such a special day. 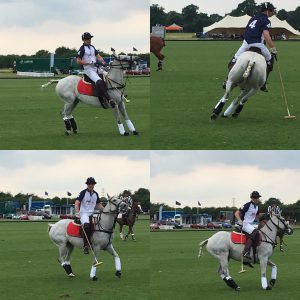 If you’d like your charity to be considered by Norfolk Property Online for support in 2018, please contact us.

If you’re interested in selling your property and would like it valued, Norfolk Property Online offers free valuations. Call the office today on (01603) 300900 or email [email protected] to arrange your valuation.