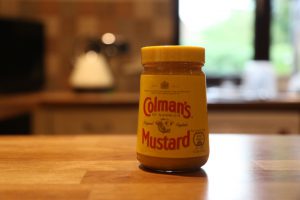 Colman’s Mustard was first created in Norfolk in 1814 when Jeremiah Colman started his mustard and flour business at a water mill in Stoke Holy Cross, just outside of Norwich. The business stayed here until 1858, when Jeremiah James Colman, great-nephew of Jeremiah Colman, took over the business and moved the production to a new factory at Carrow Road in the centre of Norwich. Here, Jeremiah James and his wife built the company into one of Norwich’s iconic businesses. It’s known that employees of Colman’s were deeply cared for and treated like family. They even opened a school for the children of their employees, as well as company housing and a nurse to help sick members of staff. 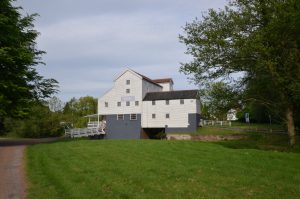 As the business grew and grew, so did its recognition throughout the country. In 1855 the iconic bull’s head logo was adopted as the company’s trademark logo. 11 years later, in 1866, Colman’s Mustard was granted the Royal Warrant as manufacturers of mustard to Queen Victoria, and it is still used by Her Majesty’s household today.

In 1903, Colman’s took over rival mustard maker Keen Robinsons & Co in an effort to reduce competition in the mustard market. By 1909, the company had 2,300 employees working a variety of jobs.

Since In 1995 Colman’s has been a part of Unilever UK Ltd. Using a well-established network of distributors, Colman’s products can be found all over the world.

Since its creation to the present day, Colman’s Mustard has been an iconic part of Norwich and has maintained many links with the city.  From 1997 to 2001, Colman’s were the main sponsor of Norwich City Football Club. The Colman’s Mustard Shop & Museum, located in Norwich’s Royal Arcade, serves to educate people on the history of Colman’s as well as selling numerous Mustard-based products.

Like many things in Norwich, Colman’s Mustard is one of the oldest existing food brands of its type, and we hope it continues to supply the world with its tasty products for many years to come.